Coledale resident, Alan Tanner, has been presented with Life Membership of the Tamworth and District Model Engineers Inc (TDME) during their Annual General Meeting held on Saturday 6 August 2011. 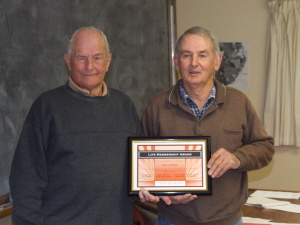 Known to his mates as “Spadger”, Mr Tanner was one of the founding members of the TDME when it officially formed in mid 1997 when a small group of around ten engineering enthusiasts got together to promote their passion.

Nowadays the group has more than forty members and operates the miniature railway in Tamworth’s Botanic Gardens, boasting hundreds of thousands of dollars worth of assets built on public land with the help of the community, Tamworth Regional Council, Government grants, Job Service Provider projects and volunteers.

Mr Tanner hosted TDME meetings in his garage for many years and the first lengths of track were built on a jig set up in his backyard. He has also hand-built a truly life-like 422 class locomotive used in many displays over recent years.

This engine is one of a number that operate on ‘public running days’ held at the railway track on the third Sunday in every month, with families from all over the region enjoying the model trains, the scenery and the facilities.The running days have become the main source of new income for the TDME so that it can continue to improve the track facilities.

Work has been completed on the construction of the locomotive & carriage storage shed, workshops, signal box and meeting rooms. This was completed through projects run by Joblink Plus where locals are provided with building and construction skills. This comes on top of Joblink’s work completing the Victoria Park railway station a few years ago.

Another major source of interest is ‘Birthday runs’ where families can hire the track and facilities (for just $200), with TDME members driving unlimited numbers of train circuits, for two hours on any day of the week. This is also proving popular with school and charity groups, such as Rotary, which has hosted a number of international students for a day at the track. The children’s Toot-Toot Club now has more than 330 members.

The TDME group is always looking for new members with an interest in engineering or model rail and they organise trips to other railways plus provide full insurance for members under the Australian Association of Live Steamers and through being members of a Tamworth Regional Council Section 355 Committee.

So, what started fourteen years ago with Alan Tanner and a small group of enthusiasts has now become a large venture and yet another attraction for the Tamworth community.