Tamworth’s own Toot Toot Club, operated by the Tamworth & District Model Engineers (TDME) now boasts more than 500 members and has doubled in size each year over the past three years as the Miniature Railway at the Botanic Gardens become more popular.

More children (and some adults) join every Sunday that the Miniature Railway has a public running day, which occurs on the third Sunday of every month.

The Oxley Loop track is now open and the Joblink Plus sponsored workshop and club rooms are operational as the Tamworth and District Model Engineers club solidifies its position in the Botanic Gardens precinct.

Toot Toot Club membership is just $15 and includes a T-shirt, Membership Certificate and 10 free rides any time in 2015. 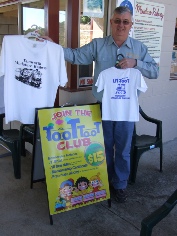 amworth and District Model Engineers operates the railway and public running days occur on the third Sunday of every month, featuring rides for adults and children for just $2. As an important safety feature, all train riders are reminded to wear covered in footwear, i.e.; no thongs, scuffs, sandals or crocs. Loan shoes are available on site.

The Miniature Railway is situated alongside the Tamworth Botanic Gardens at the top of Piper Street (just past the TAFE). It boasts two circuits (plus 2 tunnels), a number of trains will be running on the day and a sausage sizzle is available.