Our Mate Howard Penrose Honoured. Our much respected and liked member, the late Howard Penrose, has been honoured in a truly fitting way by his fellow members from the Tamworth and District Model Engineers with the unveiling of the picnic pavilion at the Victoria Park miniature railway, on 06 September 2014.

The pavilion, unveiled by Howard’s widow Marj in the presence of family and many friends, was made possible through a $24,000 grant under the NSW Government’s Community Building Partnership Grants scheme. Mr Kevin Anderson, MLA for Tamworth, present at the unveiling, gave his much appreciated strong support for this grant.

Club President, David Scott, said that ‘Howard’s idea was to get the sausage sizzle happening’. Howard, along with Marj, ran the barbecue at running days for a considerable time.

The pavilion is now used by the Tamworth community during running days, birthday parties and at other times. 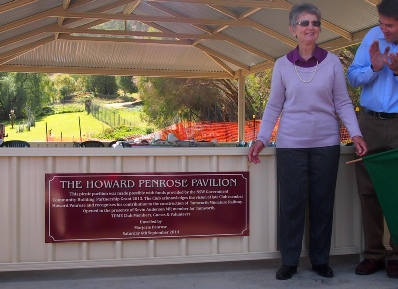