Changing of the ‘guard’ at Miniature Railway

There’s been a change of the ‘guard’ at the Tamworth Miniature Railway with two long serving executive members stepping down at the AGM on 1st August.

After serving seven years as President, David Scott, has stepped down to a Vice-President’s role and even longer serving Treasurer, Ron Salter, has left the banker’s chair, but has boasted some very strong financial results for the Railway over the last financial year. 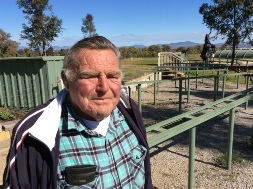 He will be supported by David Scott and Les Thomas as vice-presidents, former anaesthetist, Bob Green, as Secretary, with Phil Day as Treasurer, also doubling up as Public Officer.

Jim Booth was returned as Publicity Officer and Manager of the Toot Toot Club (which now boasts more than 500 members) and Troy Yates was elected as Librarian of the group’s expanding collection of memorabilia.

Operated officially as the Tamworth District Model Engineers Incorporated, the Miniature Railway now has 32 members and turned over nearly $32,000 in sales in 2014/2015, mainly from the monthly public running day (3rd Sunday of every month), birthday party runs, donations to the club, and the popular sausage sizzle on running days.

The major expense for the club continues to be nearly $10,000 per annum on repairs and maintenance to the track, locomotives, riding cars and other infrastructure such as the station and signal box. Its been estimated that a conservative valuation of the major track and building infrastructure is in excess of $500,000 – not bad considering the miniature railway was an empty paddock ten years ago.

Other more liquid assets make up to nearly $50,000, with a significant amount held in cash to pay the annual insurance levies. The Club also donates all profits from its May running day, with the Westpac Rescue Helicopter benefiting this year.

As the Miniature Railway continues to become popular with more children, especially with nearly every weekend booked out for children’s birthday train runs and barbecues, the Club is always looking for new members. They can be found on-line at www.tdme.org or at the railway at the top end of Piper Street (just past the water tank) most weekends, but especially on the monthly running day, held on the third Sunday every month of the year.