The article in the Taminda Advertiser for May/June 2016, pages 24-25, regarding the Ken Baxter constructed Lima Kay locomotive, was the trigger for looking into the origin of the Lima 2-4-0 narrow gauge model locomotive, and the actual locomotive build on which it was based.

Keith Watson from Perth Western Australia, on a visit to the USA, saw a model of the Lima 2-4-0 running on a model railway layout and subsequently designed and produced plans, castings, and parts for his version of the locomotive which he called Lil Lima.

References can found to Keith Watson's Lil Lima as the basis for similar locomotives subsequently constructed by modellers in the USA, Australia, and New Zealand. Ken Baxter's model was constructed in the early 1990s using the Lil Lima design which he renamed as Lima Kay after his wife (Kay).

Research strongly suggests that the Lil Lima design was based on a locomotive produced by the Lima Locomotive Works in 1888, construction number 204, built for Welch Brothers of Alabama. This was the only rod type 2-4-0 constructed by Lima in the 20 year period 1878 – 1898.

The Lima Locomotive Works was originally a small engineering shop in Lima, Ohio, which commenced operations in 1859 supporting the local agricultural industry. It was soon to be taken over by a group of investors and renamed the Lima Agricultural Works. The business closed in 1866 due to the death of one of the original partners, but the local community was able to put together another group of investors and reopened in 1869, under the business name of Carnes, Harper and Company, which operated as the Lima Machine Works. In 1870 on the withdrawal of Harper it was reorganised and the business name changed to Carnes, Argerter and Company.

Over the next 10 years Lima Machine Works steadily developed and built an increasingly wide range of equipment for the timber industry and by 1880 almost all of their customers were exclusively from that industry. It was as a result of their prominence in the timber industry that Ephraim Shay approached the company in 1878 to build a new locomotive design which used gears instead of rods to deliver more pulling power and greater efficiency when transporting logs to mills.

The Shay design proved so successful that many in the industry wanted to have similar locomotives and in order to meet the demand Shay licenced Lima Machine Works to build and market the Shay geared locomotive. By 1880 The business almost exclusively produced Shay locomotives and, in the next 10 years, built over 300 Shay units and would go on to produce more Shay geared locomotives than any other company in the world. In 1879 Lima Machine Works also delivered its first rod locomotive and went on to produce 33 units over the next 10 years. Wheel configurations were either 0-4-0 or 0-6-0 until build number 204 which was the first 2-4-0 produced in 1888 as previously mentioned.

In 1925 William E. Woodward, Lima Locomotive Works' lead mechanical engineer, developed the concept of 'Super-Power' by making significant changes to the boiler system and fire grate design of the conventional locomotive which resulted in the delivery of more horsepower at higher speeds without increasing wheel loading. The Super-Power 'Berkshire' 2-8-4 locomotive revolutionised the industry and provided Lima with a much needed boost to its fortunes as the Shay was obsolete by 1930. 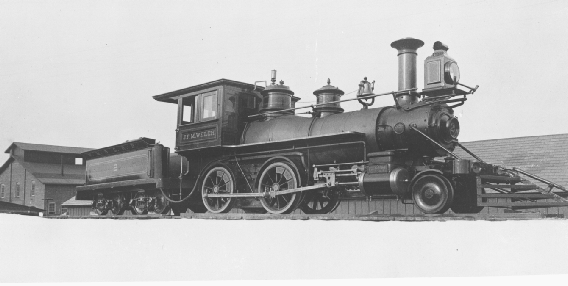